Try out the entry or view the repository. 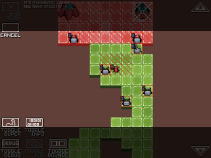 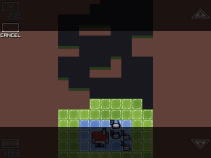 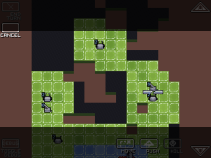 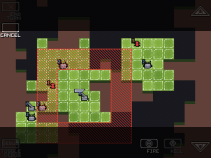 This was my entry for Github's Game Off 2012. The aim was to create a web-based game loosely relating to one or more selected git terms. I created the game and engine from scratch for the event, opting to use HTML5 and Javascript as I hadn't yet had the chance to play around with Canvas. The git terms I focused on were 'pushing' and pulling'.

The game plays out like a traditional turn-based strategy would, except that your units are split into two specifications: expendable and replaceable worker units, and expensive, stationary artillery units. The worker units exist to scout out ahead through the fog-of-war -- often resulting in their deaths -- and to maneuver your artillery units into offensive positions via pushing and pulling them. Your artillery units are the only offence you have and once they are lost the game is over. To win you must reach and destroy the enemy base.

The maps are created procedurally using a (variable) number of 'ants' which 'burrow' a path from one end to the other. The ants have a quota of left and right movements that they must fulfil before moving up one, and bounds on how far left or right they can move. These horizontal movements are randomised along with the ant's starting position. This method ensures that there will always be a path connecting the bottom of the map to the top and as a result all maps will be valid. In addition to this, both the size of the bases (the player's landing zone and enemies base, the former of which will always be smaller in comparison to the latter) and the size of the map is variable.

The 'Ant' wiggles left and right randomly from its starting position (the circle) until it reaches its wiggle quota, n, and then it moves up to the next row from its current position (the dotted line). The Ant cant move more than x spaces from its starting position in either direction (denoted by the red half blocks) and when it reaches this boundary it moves in the opposite direction. The spaces visited by the Ant are valid terrain (green squares) and any not visited are impassable terrain (black squares).

Originally I planned to use a set of circles to create the map by placing points at distances along the map (with some random variance) and then expanding the radii of the circles together until they collide with one another. This ensures that there is a valid path from one end of the map to the other. However, because the maps have a constrained width this led to the map essentially being a solid block except for one or two missing tiles.

Small circles that fit entirely inside one space (black circles) are seeded throughout the map at set distances apart (with some random variation) and grow their radii in turn by a size of one space (the dotted line) until they collide with each other. Every circle must collide with at least 2 others or with a map boundary (top or bottom). Any spaces inside the resulting circles (red circles) are considered valid terrain (green squares) and any outwith are impassable (black squares).

Due to time constraints (a lot of the time was spent working on the actual engine) there are a lot of planned features that didn't make it in. Things such as mobile enemy offensive units that patrol or seek you out, enemy camps -- essentially smaller versions of the enemy base -- which act as blockades to be avoided or destroyed, a variety of player units to control, and some sort of resource or base management. On the engine side of things I would have liked to have audio support (both music and sound effects).